Stainless Steel shines instead of rusts

We build stainless steel fertilizer blender scales, hopper scales, general purpose hopper scales, tank scales, fertilizer dealer scale management systems and general purpose custom scales and weighing systems. Initially, our scales were mostly to retrofit hoppers and blenders manufactured by Adams, A. J. Sackett, Burton, Doyle, Kraus, Layco, R & R, Ranco, Speed King, Tyler, Waconia and/or almost any 5 to 12 ton capacity blender/hopper. Now, some customers are ordering their blending systems, without the scales, from blender/hopper manufacturers and the fertilizer scales or weighing systems from us. Some have worked with us to deliver the very best value in blending and weighing.

Norm DeJong at East Central Iowa Cooperative in Jesup bought our scale for his Waconia weigh-hopper. After installing, Norm sent an email telling us that we were way off on our 2-4 hours for installation. It took about half a day to cut out the old scale. Once the weigh hopper was lifted and the old scale pieces moved away, it only took minutes to slide the new scale under the hopper and drop in the bolts. He said the scale technician from Fairbanks came the next day and hooked up the read out/printer and calibrated in about half an hour. He arrived mid morning and Norm said he commented as he finished, “thought I’d be here ‘till 9:00 tonight.” A few months later East Central Iowa Coop bought another scale for their R & R system in Hudson. 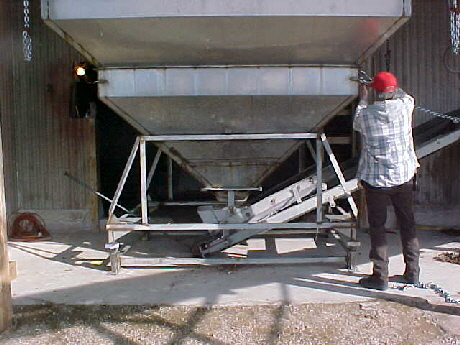 For Clarification:
A few scale dealers do not understand that our scale has been certified as a complete weighing system for the requirements mentioned above. Perhaps because some companies attempted to put stands under the corners of a hopper, hook up load cells and an indicator and say it is NTEP Certified. It is not! Some simply don’t want to give up the service revenue generated by mechanical scales. Several years ago when TN became an NTEP state, we were not happy about having to go through the rigorous National Type Evaluation Program (NTEP) conducted by the National Conference on Weights and Measures (NCWM) but we did and now we’re happy we did.

Important note: Every component, particularly the frame, was subjected to rigorous and expensive testing procedures before the scales were NTEP certified. At the time, we were not thrilled about it, but now we have the only NTEP certified fully electronic Stainless Steel scale (that we know about) that is legal for trade with fertilizer blenders/tanks/weigh hoppers. We are using some design elements (trade secrets) that are unique to our scale. References from major fertilizer vendors and independents are available on request. Our customers are our best salespeople.

The stainless steel frame is shipped pre-wired with all components installed and custom fitted to match the fittings on your vertical blender or weigh-hopper. Typical installation takes 2- 4 hours. NTEP certified for up to 12 tons. 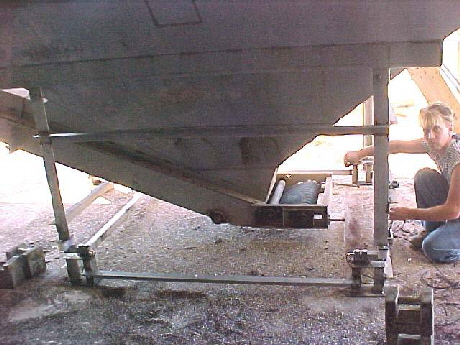 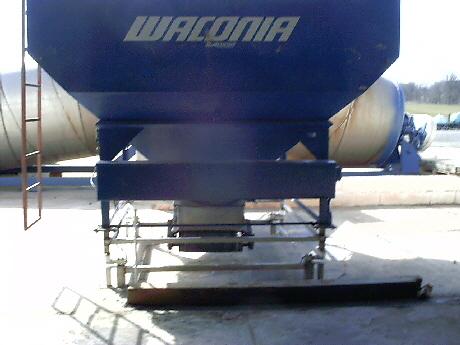 It is important to note that some major hopper and tank manufacturers mistakenly imply that using certain hopper or tank mounts with NTEP certified load cells and NTEP certified indicators is the same as an NTEP scale....don’t be confused, it is not. Unfortunately, many users make that discovery too late. The complete weighing system including the frame must be certified.

The National Type Evaluation Program (NTEP) was developed In order to ensure that equipment reaching the market place is manufactured to meet requirements established by the National Conference on Weights and Measures (NCWM). That gave manufacturers the ability to be evaluated and certified one time with acceptance throughout the United States. Previously many states implemented State Prototype Testing and manufacturers were then being subjected to multiple time consuming and costly state evaluations. States, manufacturers and consumers all benefit from NTEP's service.

NTEP is more than certification. It is a complex program of standards development, evaluation, management and problem resolution. Administered by NCWM, NTEP provides a forum for regulators, industry and technical experts to work together toward consensus on issues. There will always be new technologies, new techniques and new marketing strategies. NTEP assures appropriate response to the needs of the marketplace. NTEP is not a barrier to new technology rather a facilitator of technology being put to use in a responsible and efficient manner.

The NTEP technical policies and checklists for evaluation are published annually in NCWM Publication 14. The various volumes are available for purchase from NCWM individually in printed format or all-inclusive in electronic format."